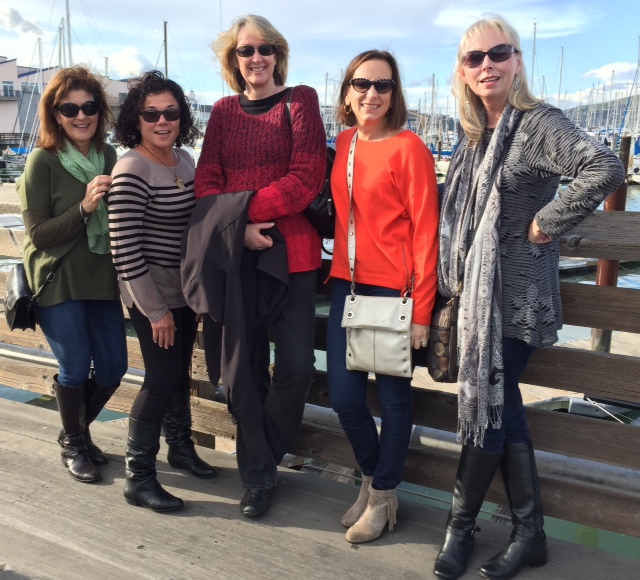 The day began innocently enough.  Five friends from high school met in San Francisco for fun and sightseeing.  Two of us are currently from the bay area and the other three are visiting from the OC where we all grew up.  We’re a classy bunch.  At one time in our lives we used to elicit looks and howls from handsome men on the street but now we just kind of blend in with the masses of humanity enjoying the beautiful day and weather.  Our best qualities now internalized.  Just when did that happen?

Nonetheless, we think we are pretty hot babes.  (Or at least Perry thought we were.. more about that later…)

After a go around in the Ferry Building and a satisfying lunch (no calorie counting today!) we forge our way up the Embarcadero towards whatever suits our fancies, stopping to have our picture taken and do a little people watching and shopping.  With happy hour fast approaching, we set out to find a friendly bar.   Feeling very urban sophisticated, I suggest we call an UBER and promptly press my handy app.  A Toyota Corolla was on its way and would arrive in 2 minutes.

WAIT!  There’s five of us!  No way.  I quickly cancel and we squeeze into to a nearby cab that’s just barely big enough for the five of us and head to a groovy street for shopping and bars- “Chestnut in the Marina”.  The driver says “oh, that’s only about four blocks away..”   Twenty minutes later, we arrive.  Really?  Four blocks?   Not even.  Sandy would have liked to walk it with her Fit Bit.  The rest of us were content to be driven.

In and out of shops we go, all the while looking for a bar appropriate for our age category and level of sophistication.  The Tipsy Pig looks like fun with its’ 20 and 30 something beautiful people falling out of the windows and doors!  Oh yeah…  we aren’t 20/30 anymore.  Not a bad thing we all agree!!

We settle on the Ristobar with equally beautiful people more in our age category and somewhat more enlightened.  Sitting at the bar, we flirt with our bartenders like old times.  Why not?  We are classy babes from the OC!   I text my son Peter to let him know we are in his neighborhood.  He’s across town with his friend Nathan.

Darn.. the girls really wanted to meet him.

He says “have fun mom and don’t get into trouble!”  He has no idea what trouble his mother can get into with her hot girlfriends…

Now we are hungry for dinner and a little tipsy to boot.    I asked the lady next to me at the bar (who BTW was from Seattle) how to hail an UBER big enough to accommodate the five of us.   I selected UBER XL (or I thought I did) and my phone announced a white Honda Accord was on its way to wisk us off to the Fog City Diner

Boy that was fast.  As soon as we hit the street there it was.  Our white Honda Accord chariot.  We opened all the doors and began to pile in asking the driver if he was sure he could take all five of us!!   Not only was English his second language but I’m guessing the sight of five gorgeous babes climbing into his car was too much to believe!

He was rendered speechless..

Just then.. my phone rang.  The voice on the other end of the phone asked “where are you?  I’m here on the corner of Chestnut and Scott!”

We realized we were in the wrong Honda just as the man tried to explain in his broken English that he was waiting to pick up his wife!  Now stunned and embarrassed, we quickly evacuated white Honda Accord #1 and proceeded to jump into white Honda Accord #2, all the while laughing and gasping for breath.  Of course our UBER driver got to hear the entire story.  He was somewhat entertained.

Still greatly amused at ourselves, we arrive at the Fog City Diner where we are promptly seated.  The mood of our group was quickly picked up by our intuitive waiter, Perry, who asked “Are you ladies ready for an adventure?” at which we dissolved into uncontrollable laughter once again. Perry volunteered to order the entire feast for us including the wine.  We accepted the offer and the unsolicited flirtation.

Obviously he recognizes our inner hotness.

As a part of his fantasy, he renamed us all.   Dawn was Penelope.  Linda was Gwen.  Sandy was Maria.  Lisa was Susan.  I was Betty Ford.

Ok enough!  I ONLY had one Lemon Drop at the Ristobar!  My girlfriends had my back and begged for a more exotic name for me.  Sensing a potential post-menopausal riot, Perry renamed me Annalise.

The parade of food began..  Grilled Local Calamari, Hand Cut Furikake Fries, Lacopi Farm Brussel Sprouts, Caeser Salad, McFarland Springs Trout, Wagyu Flank Steak Fries, Short Rib Kim Chi Tacos, and two bottles of very expensive wine, after which we had two desserts (by then we didn’t care what we were eating..).  I asked for some table bread half way through the parade but Perry said NO it will ruin your appetite.  ( I don’t think he liked me..)

As the feast drew to a close, we asked Perry what his story was.  What’s a handsome middle aged man doing in the city waiting tables?  We heard his entire life story. Wife accused him of being abusive.  Turned his three beautiful daughters against him.  Yadadada…

Well, with age comes wisdom and these babes recognize a shmoozer when they see one!  Nonetheless, we leave a significant tip commensurite with the entertainment and attention he provided and then cozied up with Perry for one last photo.

Hoofing it back to the Bart station, we recapped the day’s mischief, feeling quite proud of ourselves for throwing caution to the wind.. just like old times!  Five hot babes from the OC doing the City!

BTW, this might have been one of those “you had to be there” stories. So if you’d like to leave a comment on this blog with your email we will invite you next time pending an UBER big enough and a driver brave enough.  Until then, let’s raise a glass to midlife mischief! 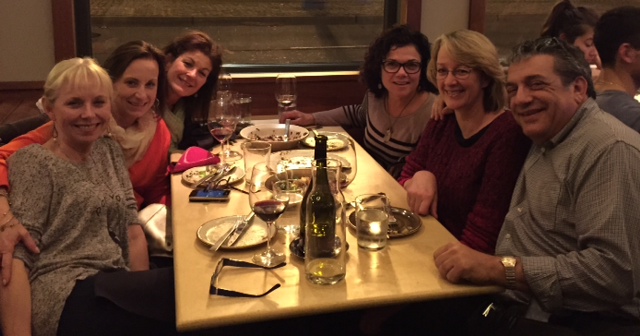